(non halal)
Mezze. Another fancy term which means finger food or small plates of appetizers or tapas. For ages we have been trying to catch up with this great twitterer @minchow. Finally, after an exhaustive study of migratory pattern of twitting birds and radio tagging her (the findings will be Published in the ornithology journal later, and her migratory pattern involves between home, work and watering holes in the PJ/KL suburbs) we managed to pin her down and decided to check out Mezze, which has seen a lot of buzz among foodies recently. For a postionally challenged (Boo says it sounds rude) Android, still getting the hang of getting around KL, I scouted out the place in the afternoon so that I will be able to make it on time for dinner.

It seem that Mezze is rather easy to locate, because it is just next to Vintry, (which I have never dined in) and behind the venerable Victoria Station, an Icon of the KL dining scene. The menu is fairly limited, but very wittily categorized under Grazing (starters), Greedy (mains), Indulge (desserts) and Afternoon Quickie (lunchtime specials).

We had the board menu specials for starters. 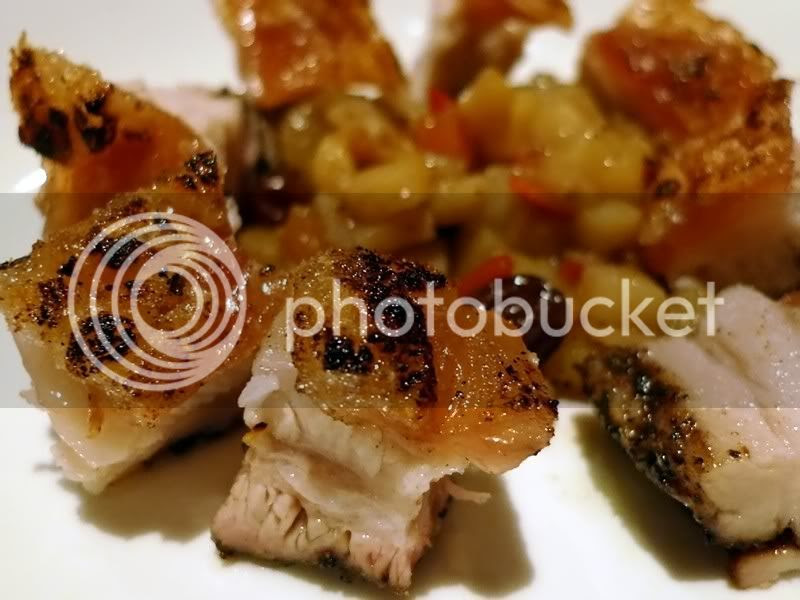 The Grilled Pork Belly came together with some apples with cinnamon, which was rather Christmasy. Unfortunately, the skin of the belly was very very tough and took quite an effort to chew. Anyway, I am not a big fan of lard anyway which makes it all the easier to disregard this dish. 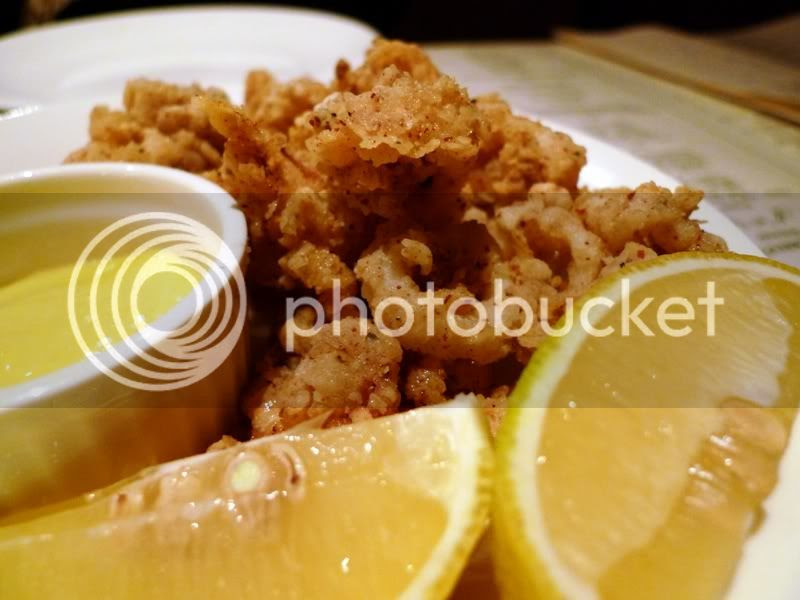 The next dish was Sumac and Sichuan Fried Calamari, which all of us thought a weird combination. Sumac is usually used as an ingredient to add tartness to Middle eastern food such as kebabs, and some varieties may be poisonous. The calamari fritters though crunchy and light, came out too bland even when dipped into the aioli sauce.

For starters, I had the Barbecued Spatchcock Chicken. Now, the term spatchcock has got a very interesting history. I googled it, and guess what? It is probably Irish in origin and comes from a shortened "Dispatch Cock!", in other words, send the chicken in quickly. How do you do that? Well, the spine or backbone of the chicken is removed, and the chicken is flattened onto it's breast and the end result of it would look as if you were lying flat on your stomach, spreadeagled. This reduces the cooking time by increasing the surface area.

Guys, if you have been a good boy, your wife might whisper demurely in your ear, "Spatchcock?", which is distinctly different when you have been bad and she screams, "I'm gonna Spatchcock you!". The term describing a chicken, with no spine, it's legs permanently spread open waiting to be .... also reminds me of certain politicians. And to prove how non-partisan I am, from BOTH sides of the political divide. 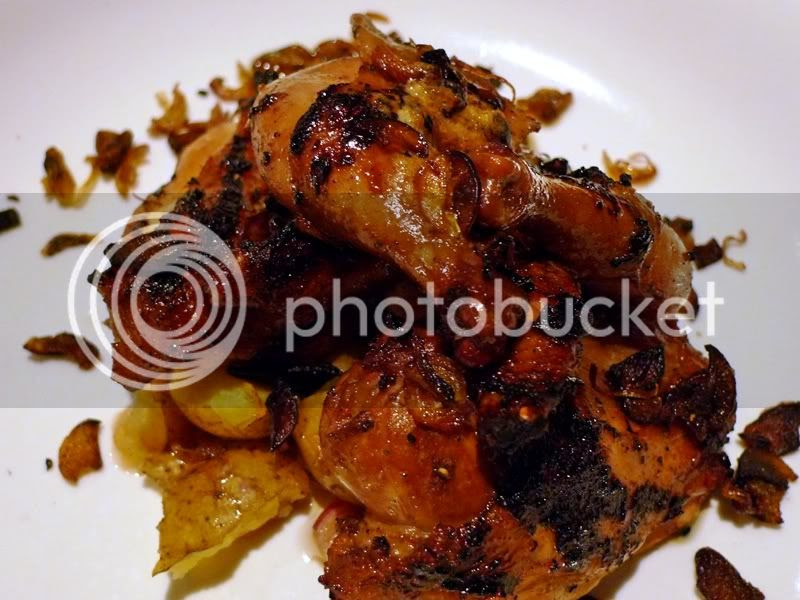 Notice the picture above? That was the Spatchcock Chicken I got. The Drumsticks were touching the wings? That would be akin to lying spreadeagled on your belly and being able to tickle your armpits, which could only be possible if you were a contortionist, or had some really serious Yoga training, or if i just chopped you up and put your legs under your armpits. OK, OK, I'm just nitpicking here. The chicken was halved. So what? How was the chicken? Well, the skin was nice and had a very honeyed, smoky flavour but had over charred bits, but unfortunately the insides were not very well cooked. Kinda like the BBQ wings we did while camping during our school days. Of course, during that time our chicken was not served with aubergine salsa and potatoes. Joe from lotsofcravings seemed to have gotten the real deal from his photos here. 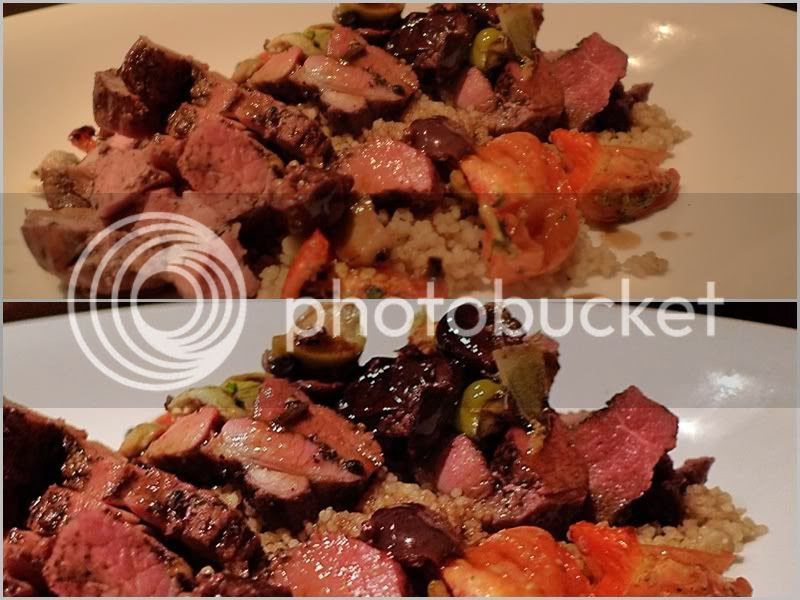 Next on the list was Ballotine of Lamb, which was marinated with tnagine spices. Probably the best dish of the night, the lamb cutlets were flavourful and tender, but the cous cous was way too bland, which was a pity. The above picture shows that if the photos were really badly taken in the first place, there is no way you can save an out of focus shot. 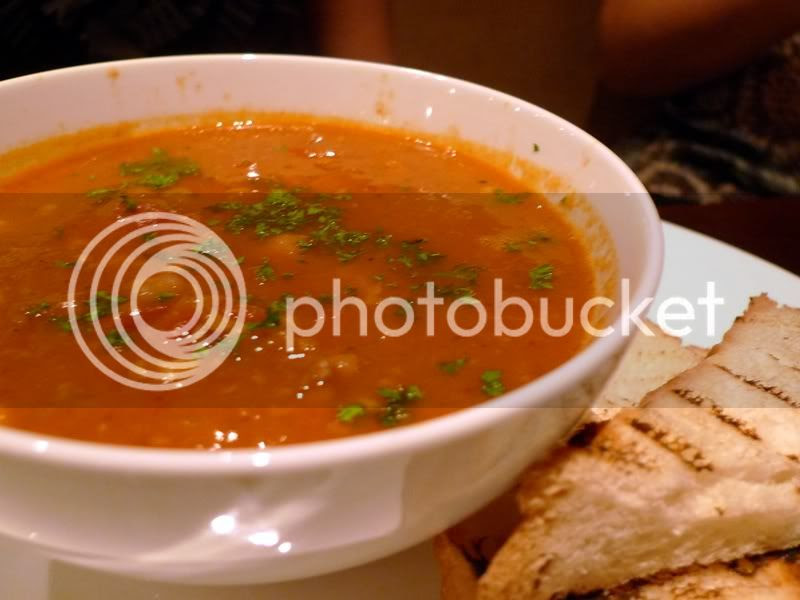 We also tried the Giusando Alicante, which was Saffron Broth, with Calamari, Mussels, Fish, Chorizo and Chilli. The soup was rather disappointing. It tasted like tomato soup, and did not impart any hay like flavour of Saffron. Neither were there any subtle hint of Pimento from the sausages. Compare this photo and the one posted on Aly's blog here. Now, be honest and tell me that there is no difference between dining there as an influential food blogger on an invited (free?) review and when you go there as ordinary folks and pay for the soup with your hard earned money.

Desserts were no longer on our minds and we just wanted to hurry out and go for desserts somewhere else (The Pressroom). To be really fair, the place had an a decent wine list, and the prices of the wine was reasonable. We paid 155 for a Prosecco. Dishes were also reasonable. 20's for the mains. The lamb was 42.

This post was not meant to insult the bloggers who went there, but the food you got and the food we got were not comparable, and I was just blogging about my SINGLE experience there. I already am a social outcast, and guys, please don't send me to have my meals at the Spratly's!

My Aunt, who is one of the best bakers I know, makes the sticky date pudding. Try it next time! ;-)

It was a wonderful evening, despite the rustic meal and unexcitable meal at Mezze. We must do it again soon!

having eaten there recently too, i gotta say, u're 100 percent correct about the saffron broth. and yeah, the pork belly skin was strangely chewy. the desserts were better though, and the service was really good...

damnit sounds so disappointing..meant to go back somemore (on my own wallet)..now how?

ur shots are still larger than life.. kinda like u oh luvlee PA;)

@FBB: Yeah, please highlight it to Jek when u see him on the 13th.

Joe: I dunno, but the food was kinda iffy that night. Maybe you should give it another round?

@Cumi and Ciki: You are a lovely gal yourself! :D

Haha... Sean warned me abt his meal & saved me a bomb on my wallet!

So well and nice posting , I like it.
Bathmate

Many thanks for your nice posting , I like it.
Bathmate