(no pork served)
KL foodies were abuzz when news of Cilantro's soft opening at Micasa hit the streets and the million dollar question everyone was and is still asking now, what will happen to Sage? After all, the iconic Chef Takashi is almost synonymous with Sage, which draws both accolades and brickbats from KL foodies. Fans of Sage will go on and on about how innovative the French cuisine with a Japanese touch is, and detractors were put off by the pretentiousness and quirky results. I do not see what the fuss is all about, Ramsay started The Maze with Gallic-Asian fusion too, but the citizens in KL seem to be lapping the food up.

What usually is a quite place for me to do lunch previously has turned into a bustling hive with Tai-Tais and Gordon Geckos crowding up the place, with almost unbearable noise levels. Dinners on Fridays and Saturdays are impossible unless one books a week ahead.

So, how is the new Sage, post Takashi era? Can Daniel hold the fort? Well, Chef Takashi still overlooks the menu and there is an ongoing collaborative effort between the two Chefs. I was there for lunch and had their seafood, and back later for dinner for their poultry. And to me, there was no discernible difference, except the dishes seem to be more robust, rather than subtle. 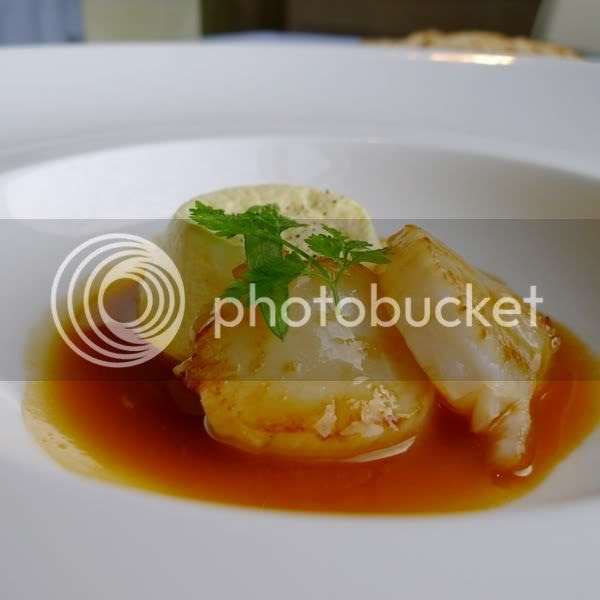 The Mousseline of Sea Scallop with Crab Bisque came in a golden hue that tasted as good as it looked, and the bisque seemed to be more frangrant than usual and the whole dish was a treat for the senses with the creamy mousseline adding richness to the Bisque while playing with the perfect texture of the scallops. 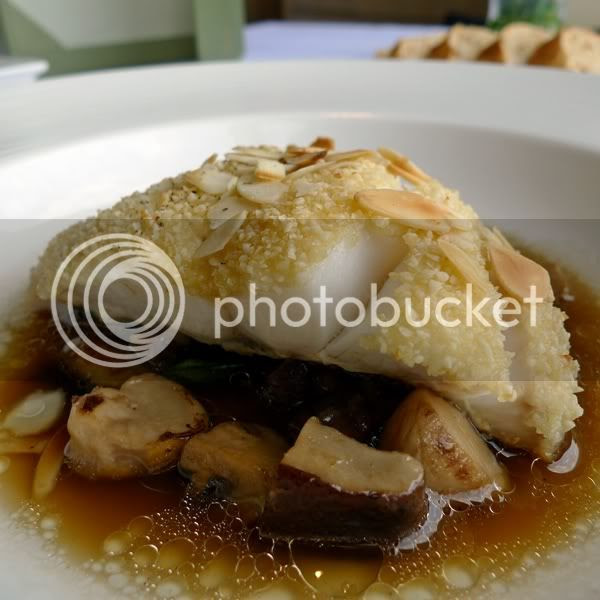 The Almond Crusted Atlantic Cod came sitting on a bed of Porcini Mushroom which was wading it it's own Porcini sweat. This was supposed to be a new dish created by Chef Daniel. It was a fabulous play of textures again, with the crunchy, dry almond crust surrounding a piece of moist, perfectly cooked piece of Cod topped by the wonderfully aromatic broth. 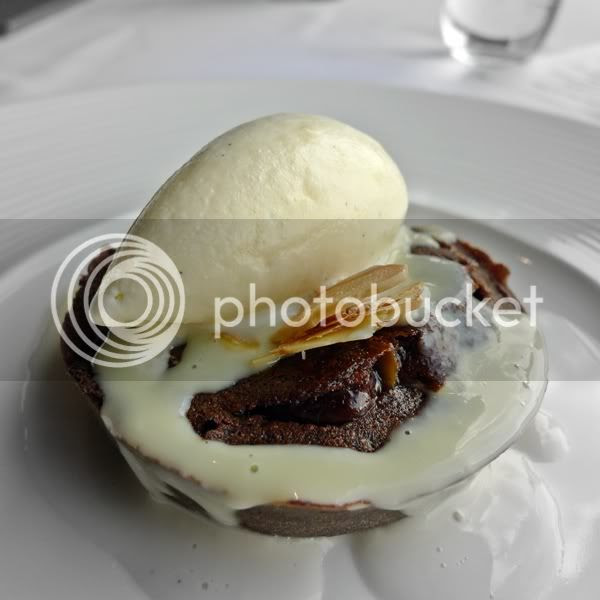 And Dessert was the warm Chocolate Galette with Nougatine and Vanilla Ice cream.

As for the Dinner menu, there have been some revisions as well. 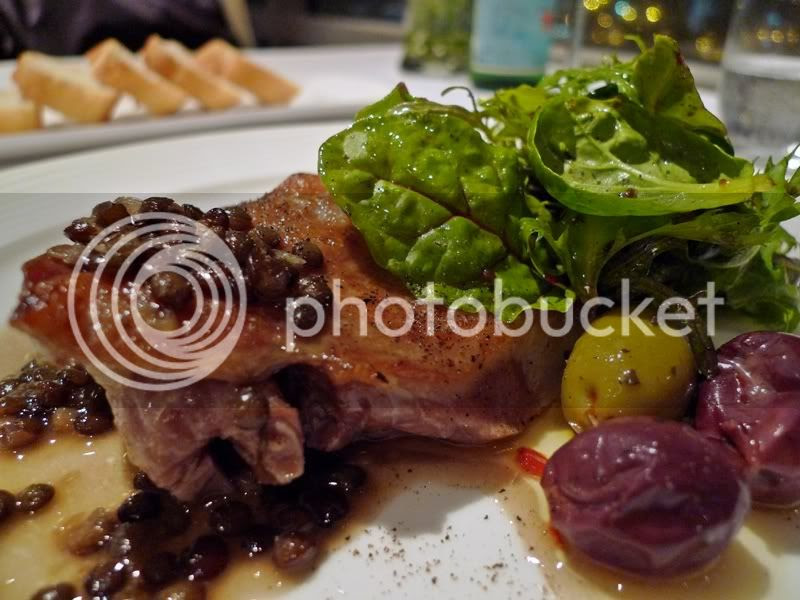 I tried their poultry for dinner, and the Confit of Duck Leg with Puy Lentlis and Olive as a starter was perfect. Beautifully smoky and gamy and tender, the condiments gave a Mediterranean zing to the duck. The dish was hearty and whet my appetite for the next course. 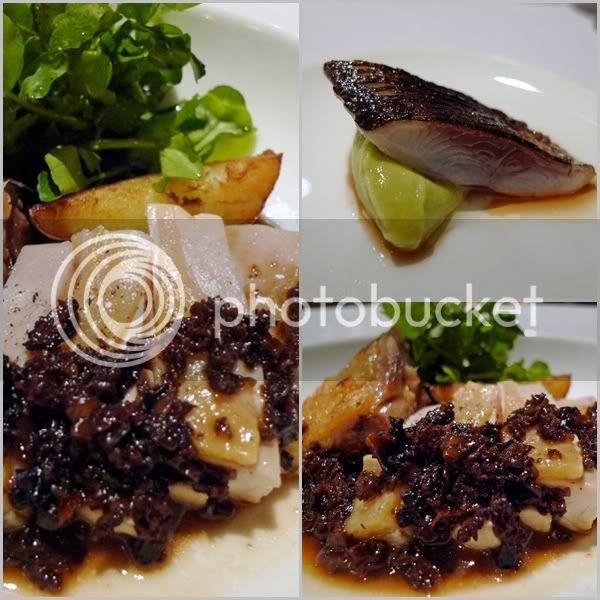 The Chapon came with two different cuts of meat, cooked in 2 different ways. The Thigh was grilled to perfection with a crispy skin (I usually hate chicken skin, but I devoured it with relish) and some steamed breast meat. The Morel Fricasse tossed onto the chicken was slightly sourish with shalots and some herbs (Tarragon) thrown into it which tempered down the satiety of the chicken skin. Inset is the amuse bouche. 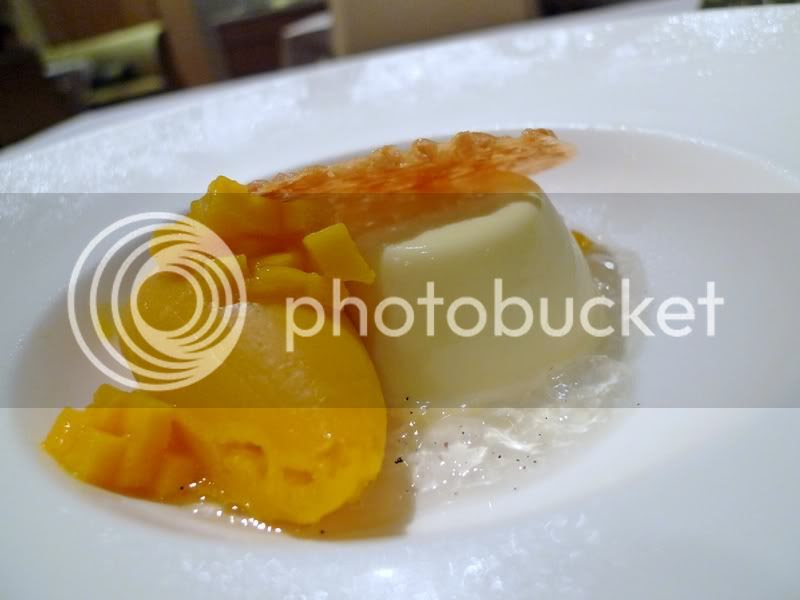 The Almond Blanc Manger was silky smooth with a slightly bouncy consistency which came with a perfect Mango Sorbet. Beautifully light dessert for a late dinner.

Though I arrived at 10pm, the dining area was still almost full and the private dining room occupied. Will be back to try their red meats later.

Mid Valley Megamall seems to have taken up the Spirit of Christmas with a Harry Potteresque floating candles decoration. There seems to be an abundance of German Stollen cakes, available from Cold Storage. The Biscuit tin that houses some Chocolates and Gingerbread from Bahlsen looks like an open book. With all the Christmas Songs in the and so many beautiful decorations around KL, I am almost convinced that the world is a beautiful place filled with people bearing no ill will against each other... Until, I read the newspaper. 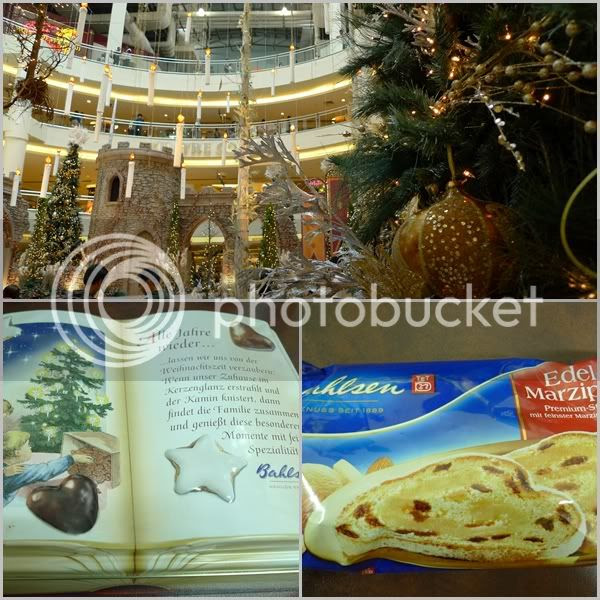 Yeah... the world is always a very beautiful place until the NEWSPAPER!!! Lol...
one can count on you to know what's happening at Sage..

They really should make you the official ambassador of Sage :-) I can't wait to head back to Cilantro!

me and su were just saying.. so urgly hor, the christmas display:P