Nebayaki Udon
I am going to start off by listing a few things that brings me the greatest comfort and joy. The give of the warm sand along a beach when I step on it, with the tiny particles trickling between my toes while my face is being blown by the briny sea breeze.

Listening to the recording of Martha Argerich's live performance of Rachmaninoff's 3rd for the first time, tears welling up when I realize that nobody had ever played it with the virtuosity and intensity and nobody will ever play it like that again. Marufuku's simple menu
The warm hug from my mother as I leave for my studies in an unknown destination. Myself filled with fear, anxiety and excitement as I begin to embark on a new phase in my life. Carrying with me my mother's hope that I will be able to experience something new and gain more knowledge that will somehow give me an edge up to be successful in life and to lead and pursue a life she never had a chance to lead. 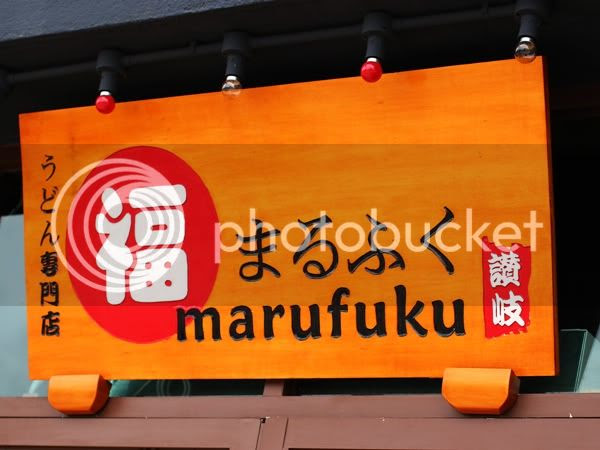 Signboard
At a neurosensory level, it is something banal. The triggering of sense receptors leading to the propagation of electrical impulses that land up in the brain. At an emotional level, it is breathtakingly exhilarating. The creation of a memory capsule that defies space and time to be summoned at will during periods of desolation and despondency as a salve for the tired soul, pro re nata. The bare bulbs
As I entered Marufuku Udon for the first time, I was slightly shocked by the rather unappealing interior. Although clean and bright, the chairs and table looks soulless, sterile and cafeteria like with naked light bulbs hanging unabashedly from it's black painted ceilings. Only after the food has been served, I realized that all of that does not matter because anything else would be a distraction to the star attraction of Marufuku. It's Udon. Wakame Udon
Smooth, slightly bouncy with the right diameter, lovingly made from fine Australian Wheat. The Perfect Udon. The Udon here is served in a variety of permutations, all of which emphasizes the noodles and other ingredients just play a supporting role to the real star of this restaurant. Cold House Udon
Perhaps the bowl of noodle that impressed me most was the House Udon, available in both the hot and cold version. Udon, some Konbu Based soup, shoyu, wasabi smeared on the side, served with a perfectly half boiled egg. Sprinkle some Shichimi and I was greeted with perfection in a bowl.

It was simple and yet the most satisfying bowl of Udon I have encountered in this part of the world. 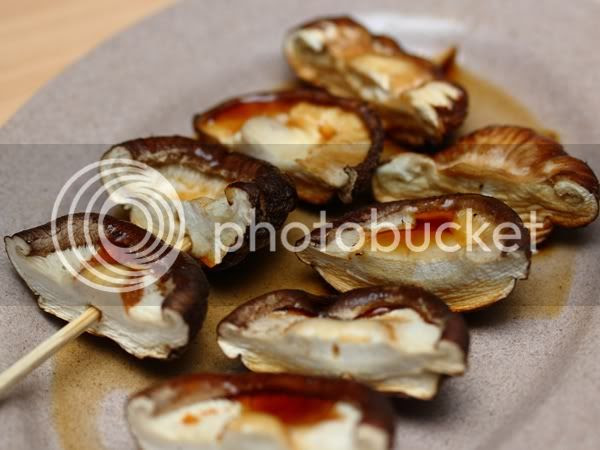 Shitake Yakitori
Their Udon is also available in other variations. In Wakame Broth for instance, again with a perfect piece of soft boiled egg. And if you like, paired with a side of kitsune and kakiage that almost intrude the stillness of the Zen like austerity of the perfect bowl of Udon, inviting you to contemplate and savour their taste and texture.

The Oyako Udon is a playful term because in Japanese it means parent-child and here Chicken meat and eggs were added to the broth, enveloping the noddles with the taste of poultry. This was my least favourite bowl udon because there seems to be a lacuna here which would be filled with more scallions.

The Nebayaki Udon as the name implies, comes in a Neba (hot pot) with kakiage and some tempura prawns. Sake chillling
Asahi Beer and Sake is available for those who need their tipple and side dishes that are served after 5 pm include Yakitori (mainly chicken parts and Shitake) and Hot Pot. 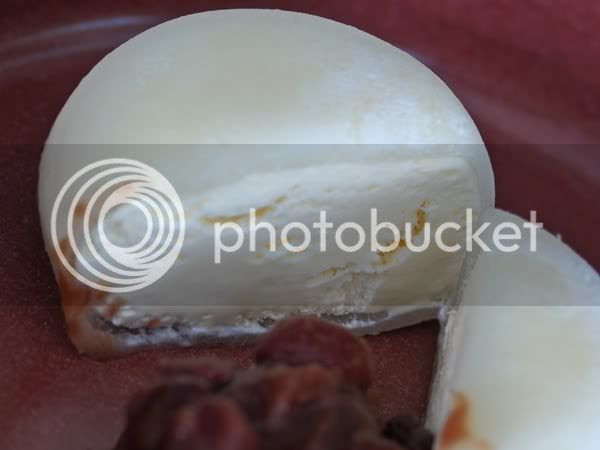 Ice Cream Mochi
Desserts are fairly limited here and perhaps just an after thought. Ice Cream Mochi or Mochi with Azuki Beans. For those who are disinclined towards the uninspired may fill the gap in the their sweet tooth at The Bee, just a short walk away which serves the lovely ice cream from The Last Polka.

I would term Marufuku a slow fast food restaurant. Well made food, served in different ways but limited variety. I tend to steer away from restaurants with an overambitious menu as the fare is usually disappointing yet expensive to appease the ego of the Chef.

Food in Marufuku is usually served within 5 minutes, and no frills approach makes the price astounding. Udons are from RM7 to RM10, Side dishes start at RM2.50. If you order carefully, it is cheaper than a McD meal. Ice Cream from The Last Polka at The Bee
On my latest trip to Marufuku on a dreary Monday filled with burdens of work and my spirit being dampened by rain, I found my trip there rejuvenating. It is amazing how a hot bowl of noodles can heal a tired psyche and despite what appears to be a Sisyphian task of going through the drudgery in living seems trivial and bearable. Dark thoughts and tiredness are banished to the corners waiting to be jolted back by another awful day, but while sipping the wonderful broth and slurping the noodles dark clouds disappeared and I thought I saw a rainbow appearing in the wet, dark night that blanketed PJ.

I usually complicate my own life and clutter it with my neurotic disposition and tend to forget that the solution to all problems would be the simplest approach, a detachment from superficial things that complicate my life. I do not need superficial friends who compete rather than accept, I do not need to give in to the crass, wasteful consumerism that entices me to spend on things I do not really need. The simplest things are usually the ones that give the most lasting pleasures in life.

Marufuku reminded me that a posh meal filled with pomp and rituals may just give transient ephemeral pleasures and the simplest meals cooked from the heart are the ones that are intransigent. They evokes the best memories that are tenacious and unwavering.

P.S. Thank you, Sea, for your kind messages. You are a gem. I took some time today to post something to let you know I am well. :D