(no pork served)
Selamat Hari Raya Aidil Adha to all Muslim friends! Two exciting news to be shared this week. One is the opening of the O gourmet food hall at BSC. A really wonderful place, where you can get cakes from A Slice of Heaven, beautifully aromatic tea from Singapore's TWG tea , Nurnberger Stollen Christmas cake, Whisky Honey, etc... I was dizzy the moment I landed there. 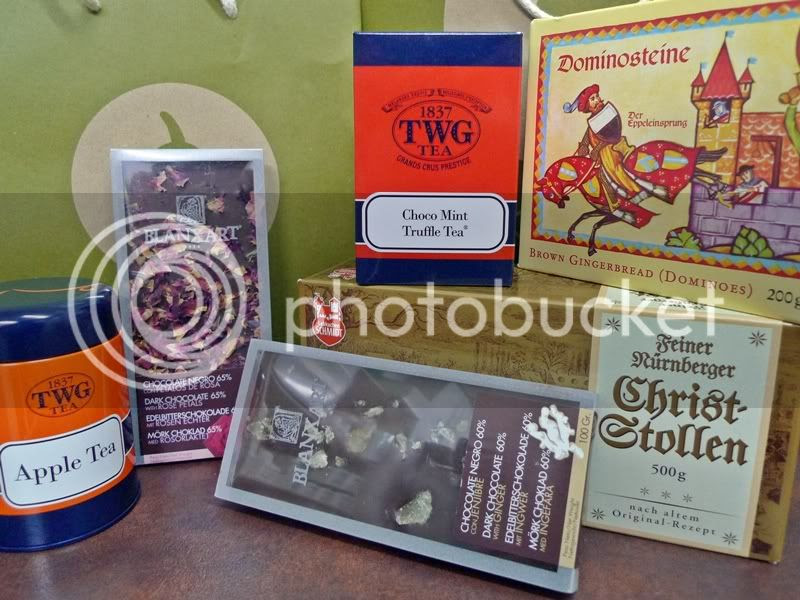 One of the more interesting items would be Dominostein (or Dominosteine in plural) from Germany. This 3-layered gingerbread is a Christmas confection with a layer of sour apple jelly in between and coated with dark chocolate. The Lebkuchen (Gingerbread) tins that are sold in O gourmet comes in the form of music boxes and musical revolving merry-go-rounds as well. 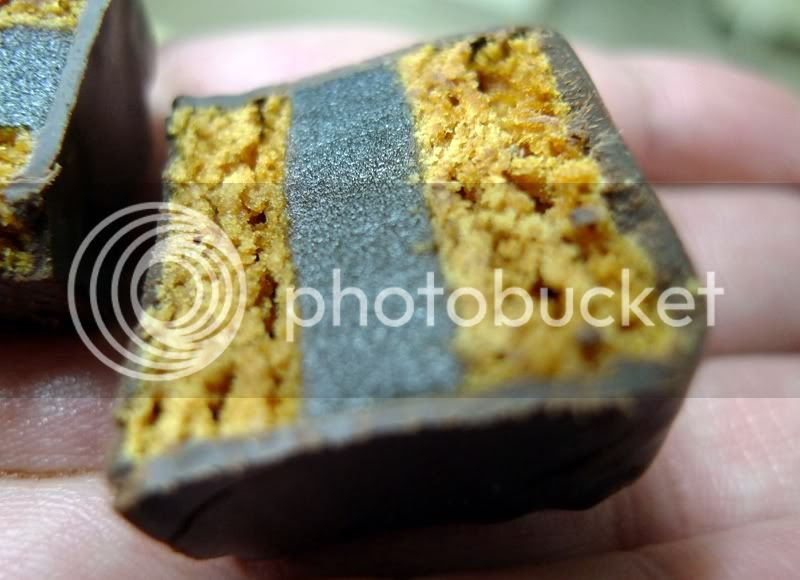 Notice the Blanxart Dark Chocolate above? They come with Ginger and Rose Petals! Have yet to taste them, but the curry infused chocolate came highly recommended by Boo.

The Pressroom is another restaurant located at the Ground Floor, is part of the La Bodega chain. Alilfatmonkey happened to be around and we had the opportunity to dine together. The concept of the restaurant is Anglo-French cuisine, but the menu seemed to be very "Mediterranean" inspired.

For Starters, I had their White Asparagus with Ravioli. As everything was white, including the plate, I had to distort the colour of the photo a bit. The lack of colour was made up by the Beautifully prepared Egg Ravioli with a creamy taste and perfect texture. The Asparagus was served with some sour cream sauce as well. 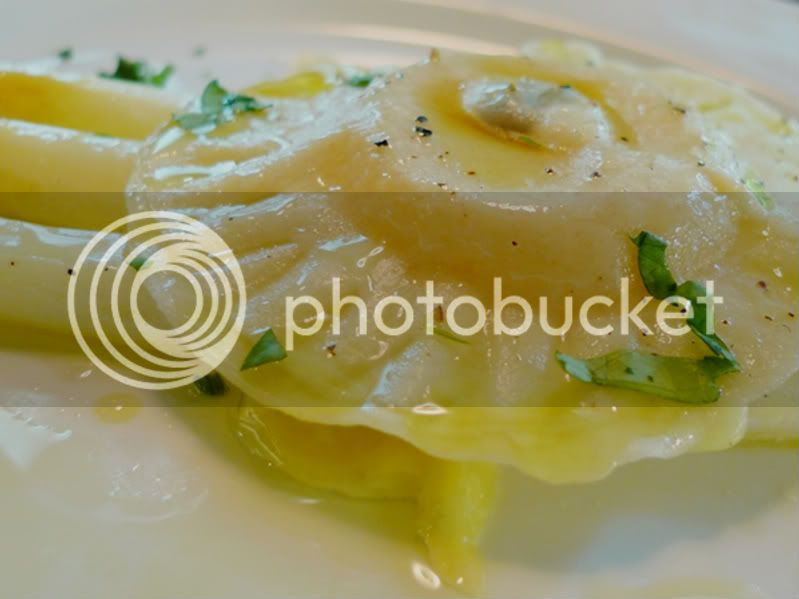 For Mains, I had the Saffron infused Linguine, with seared scallops, artichoke and black truffle oil. This was another beautiful pasta and the Saffron imparted a beautiful hay like flavour to the slightly bitter and spicy pasta. The perfect Linguine with a beautiful yellow hue imparted from the Saffron. 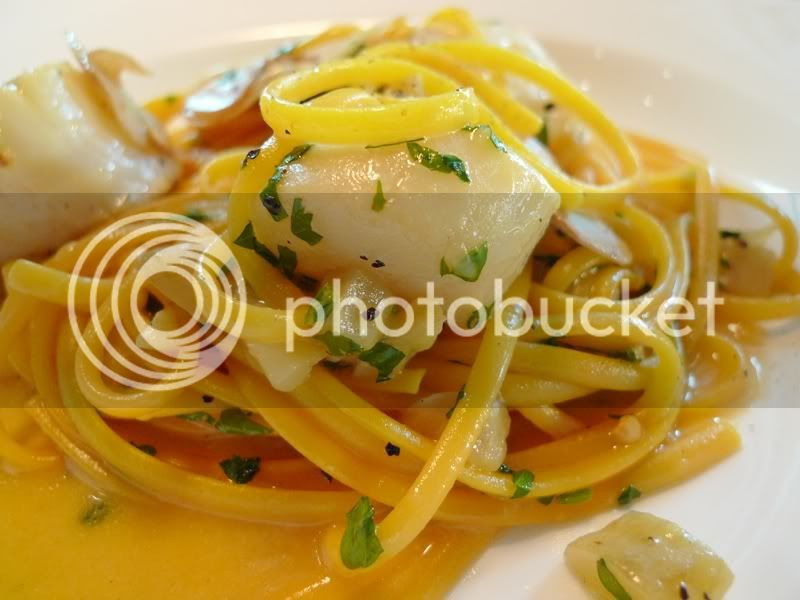 John was still stuffed from breakfast, and just had desserts. His apple strudel did not come in the expected light, fluffy crust, but the filling was still beautifully spiced up with Cinnamon. I had the Pineapple tart Tartin. The Puff pastry was rather tough and leather, but the filling was great, with the right mix of sweetness and sourness flavoured with ?anise. The Food here was interesting, and the dining atmosphere beautiful. I went there to check it out again fro dinner, but the kitchen was closed due to some technical problems. Too bad, but I will definitely go back and try out other items in their menu. 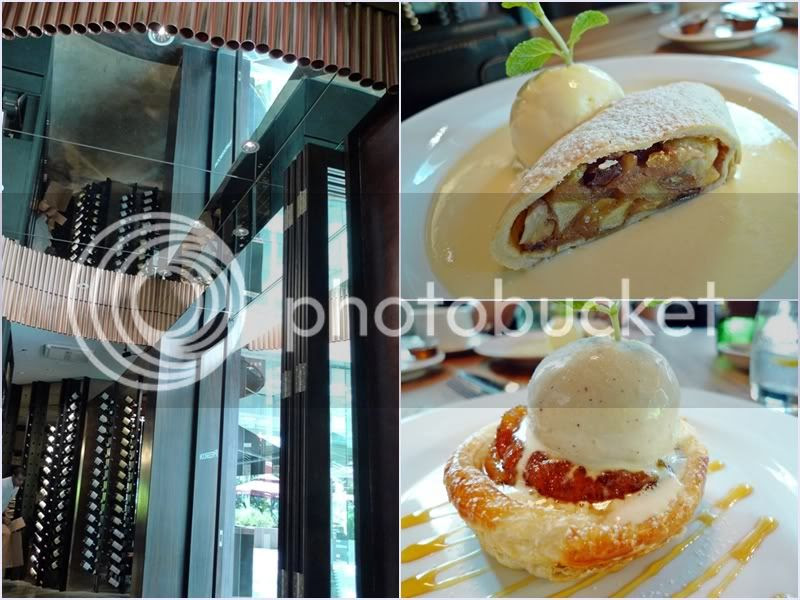 Another place you may like to check out would be WIP. Initially known as Work In Progress, it has been renamed Whipped In Place. Clever. Brought to you by the same people who run Souled out and 7ate9. It is located just next to the Pressroom. 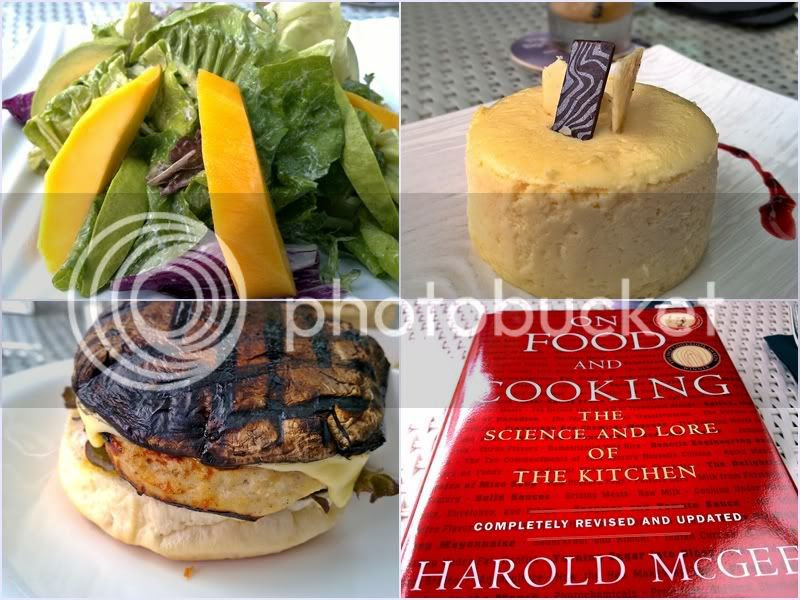 The photos were taken with my phone. The Mango Avocado Salad was very bland. The Portobello Mushroom that came with the chicken burger was beautifully grilled and still moist inside, but the burger pattie was just too salty. The cheesecake was rather run of the mill, but adequate. Service was excellent. And the book (which did not come with the meal) is McGee's On Food and Cooking. Fact laced, I bet you did not know molecular cuisine was started by an Oxford Don, who was chuffed that "we can measure the temperature in Venus, but do not know what goes on in a souffle!". Every important ingredient that is used in cooking is discussed in this book, which is never dry and boring. Anecdotes, history and scientific properties of food, mixed together in this compendium.

Remember I mentioned two exciting news? The second one is Cilantro will be reopening in Micasa on the 16th of December! Chef Takashi will be leaving Sage, which will still be under his supervision and Chef Daniel will be taking over there. Jason will be at Cilantro.

What is a paranoid Android post without something from Sage, right? 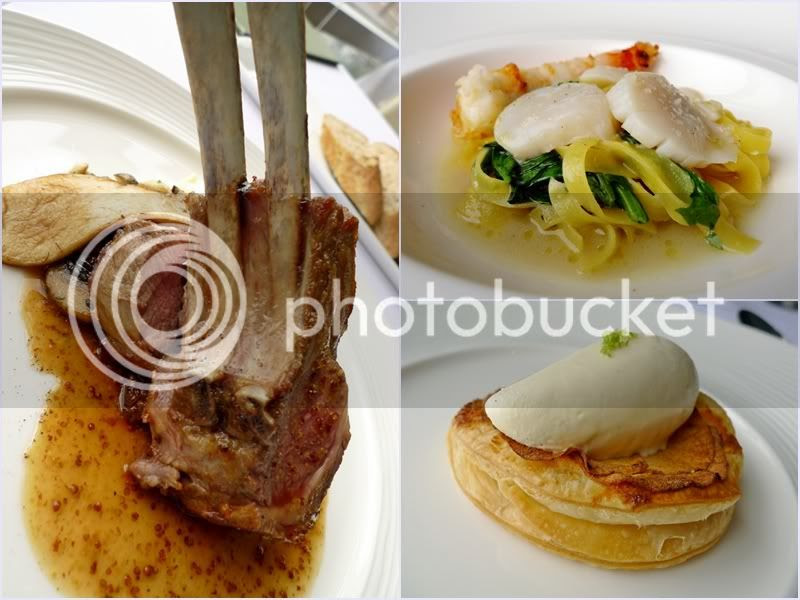 The Taglietelle pasta with Hokkaido Scallop and King Prawns is a very delectable variation of the alla olio pasta, the Roasted Lamb Rack with Sautéed Mushroom and Meaux Mustard was tender but slightly too fat. The Apple Tart Tatin was not too terribly exciting.

Do forgive the hurried post again. Done in an energizer bunny beating the drum style. Work schedule has been punishing so far and I do apologise for not updating this blog regularly! Have a nice weekend!
Irrational rants spewed out by Paranoid Android at 11/28/2009 06:00:00 AM

The Saffron Linguine looks to die for! Press Room is hawt, hawt, hawt! I can't wait to go back there for a full meal!

both the white asparagus with ravioli and saffron infused linguine r simple cross complicated dishes, i think this place really serve up some good stuffs

I agree!
The portobello mushroom burger was too salty..I had it with Memoirs of Choc - J and she agreed. She didnt finish her burger! LOL.
I dont like WIP - any of the food fr that matter..& we did staple a few cos there was a big grp of us that time..
but 789 and souled out was ok though..i wonder why the food std is aint the same.

My, the sage..havent been there!

Was thinkin of treatin myself to Pressroom after the horrendous shifting over the last week.
U free on Thurs nite? Min and I supposed to meet for "yumcha". LOL.

yes u havent been updating enuf!

i hav been very keen to try pressroom..but now tat i learnt its under a "chain", something tat im quite against as it spells crap generic food..

im confused..to go or not to go..food looks good though

hungry... just from looking at the photos....

was in BSC on Sunday but in a rush.. didn't have time to check out all those restaurants there :(

so there was pressroom, WIP and sage in the one post? aiyo, i cant cope.

Oh dear, the burger is still so salty ah? :(

@Minchow The Linguine was good lor. Let's hop over there soon. Again.

@Nomad Sorry for the delayed response. Guess it is too late to yam cha? Call me. Unka has my no.

@Joe: Now is a good time, as the exec Chef is still cooking there now, experimenting with the menu. Later, one can never be sure of the quality.

@Thule:BSC is so happening nowadays

@J: He he. Yes! And Cilantro is closer to home for me!