Gosset Champagne. The Star of the Dinner.
The Chef of Cuisine from Restaurant Richard et Christopher Coutanceau (a 2 star Michelin rated restaurant belonging to the Relais & Châteaux group in La Rochelle) was in KL for three days recently to cook up a storm as part of the MIGF. Unfortunately, what we got was a few drops of rain, lots of haze and no sunshine. 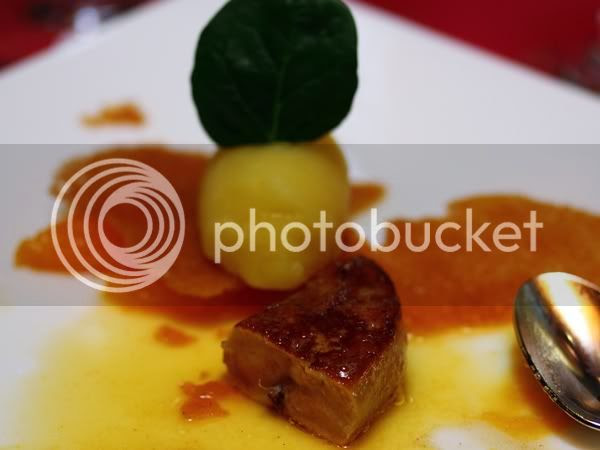 Grilled Foie Gras with Candied Mandarin and Mandarin Sorbet
The Foie had the consistency of liver and tasted like liver. Efforts to distract me with a super sugary piece of caramel and sweet candied Mandarin drove me deeper into melancholy. The least offensive on the plate was the superb Mandarin Sorbet which tasted better than what they offered for dessert. 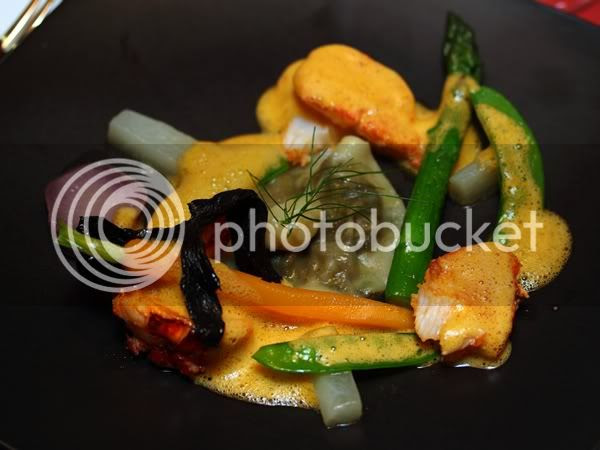 Brittany Lobster Stew with Baby Vegetables and Mushroom Ravioli
The lobster was flown in fresh, but was probably very nervous during it's turbulent maiden flight. The meat was tough and rubbery due to the stress, although the flavour was good. The dish was served with baby vegetables in a "golden shower" of light and bland buttery sauce with mushroom ravioli topped with a booger sized piece of redundant gnocchi. Squab Pigeon With Cabbage Leaves and Foie Gras, Seasonal Vegetable Casserole with Truffle Juice
The Pigeons probably did not drink enough water while flying to Malaysia and Mr. Goose did not heed it's Hepatologist's advice to cut down alcohol and hence developed cirrhosis. Mr. Pigeon's thighs got a massage before being fried, and was rewarded by a better consistency. I was glad to share the pigeon which tried covering it's inadequacies by hiding inside some Savoy Cabbage, suffocated by foie. French Sea Bass, Cucumber Cannelloni, Parsley and Avocado, Shaved Fennel and Ginger
Being the fiend that I am, I opted not to share my dining companion's burden when she offered me some fish. The age of chivalry has died a long time ago. Pineapple Ravioli, Filled with Pineapple Ice Cream and Lychee, Rum and Raisins Ice Cream, Fresh Mint Jelly and Slivers of Candied Pineapple
The dessert was mercifully devoid of any mushroom, truffles or fungi. The sensation of biting into the Pineapple Ravioli was rather unique. I doubt any fine dining restaurants are able to reproduce the sensation of biting into a thinly sliced pineapple wrapped around some shaved ice. Masochists will love it. 2 Beauties
I have chosen not to be my usual vitriolic and caustic self because of the following factors.

1. The Chef (Coutanceau) was cooking in an unfamiliar kitchen
2. The Resident Chef was away at Shanghai and could not have guided his guest
3. The Guest Chef was probably jet lagged and tired
4. The beautiful and attentive service at Senses
5. The table next to mine already berated the Chef when he went around after the dinner 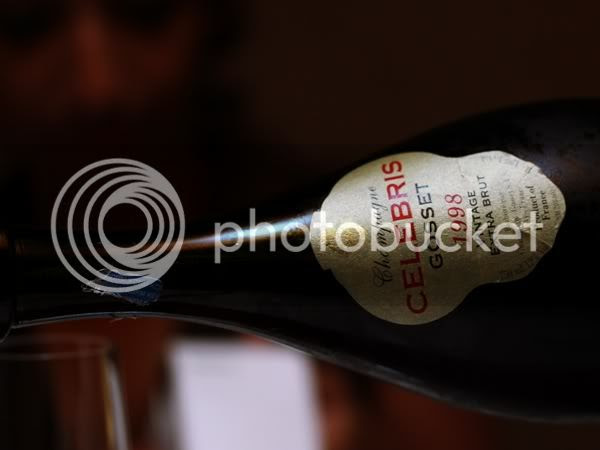 My favourite
The real stars of the dinner were my dining companions and the excellent Gosset Champagnes, especially the 1998 Gosset Celebris Brut. Copious amounts were downed because it tasted excellent and I needed something to numb my shock.

The price of the dinner was RM 598 and probably worth your bucks if you like champagne as Gossets are not cheap and it was free flow.

The reason for this post is to remind myself that it is probably wiser to ask if the resident chef would be there as well if I am contemplating a dinner by a guest chef.
Retrospectively, I could have gotten the same kick by buying some Gosset and ordering in some fried chicken at home. But then, I would not have been able to boast about having a dinner cooked by a chef from a 2 star Michelin restaurant.
Irrational rants spewed out by Paranoid Android at 10/21/2010 08:00:00 PM

Oh dear... :(
A dinner with so much potential but seemed to have fallen flat on it's face...

i vaguely remember another meal that my friend had at sense again cooked by a resident chef and it fell flat for him too..

well at least there was champagne..


The lobster was flown in fresh, but was probably very nervous during it's turbulent maiden flight!!!!

Nervous lobster, teehee!! I love this! Sometimes you have to be vicious to be kind!

there is a few Stared restaurants in France and Spain proven not on par with the Star(s) awarded, so the Michelin guide is not always trust worthy

it is advised that Michelin better stick to its core business

How I wished that I could read reviews like this more often. Usually we are fed with nonsense reviews about how great the food is but in actual fact the food is not good at all.

A tastefully vicious and honest review is what the food industry needs to jolt it out of complacency. Thank you.

This is very fluctuating besides disappointing. The restaurant should at least be kept up of its minimal standard and service. Even the resident chef wasn't there, the guest chefs shouldn't be of such a distance.

@J and @Joe: The theme of the dinner was overcooking and all it's splendours.

@Ciki: LOL. You love me because I am mean?

@Min: I love being charitable

@TC: You mean ask them to rate tyres? LOL!

@Sea: Yes. They made a real big faux pas.