Le Bouchon in French means 'cork'. As in wine cork. When I enquired around and asked for suggestions for a good French Restaurant in Kuala Lumpur, two names keep popping up. Le Bouchon and Frangipani. Both are located opposite each other along the infamous strip known as Changkat Bukit Bintang. 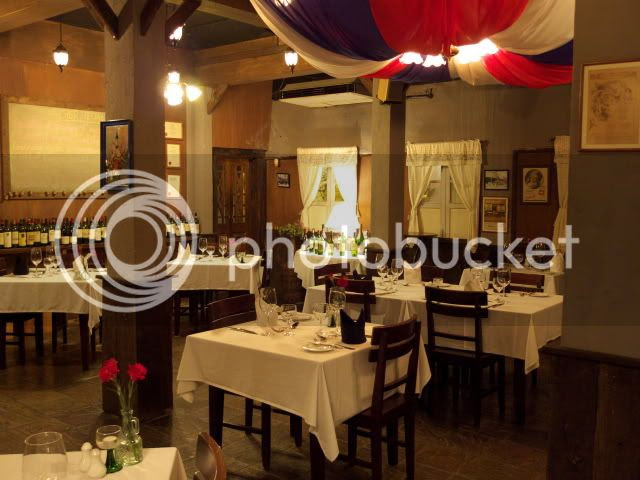 Of this two, Le Bouchon is less intimidating as it has a quaint charm, and looks like a French countryside home. It has seen a change in Management and has a new Chef as well. The menu also has been reviewed, and is currently undergoing some fine tuning. The first two entrees I had was only added to the menu two days ago. 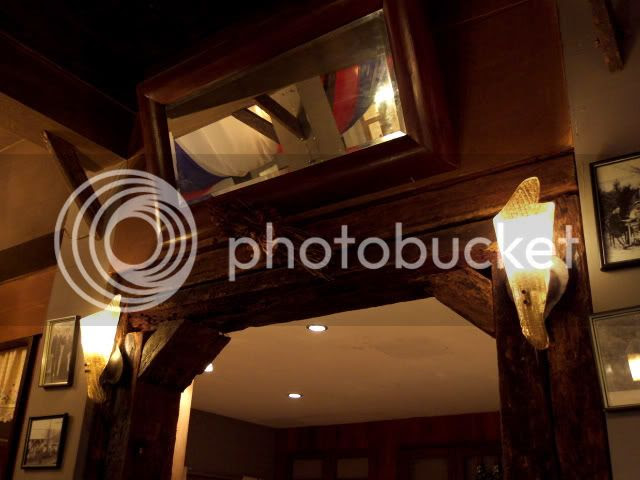 As I entered the restaurant, I was captivated immediately by it's simplicity and quaintness. Although the little goldfish pond that greeted me as I descended the steps looks a little bit tacky, the rustic, romantic interior in the main dining area soon made up for it. Lots of old wine bottles were used to decorate this place, and lots of bouchons as well. The "Gourmet Menu" was something like a set menu, where you get to choose 2 entrees, a main dish and a dessert. I thought I'd try the duck and scallops again as I had this in Four Seasons yesterday and thought that it would be fun to compare it with meal with duck and scallops in a French restaurant. 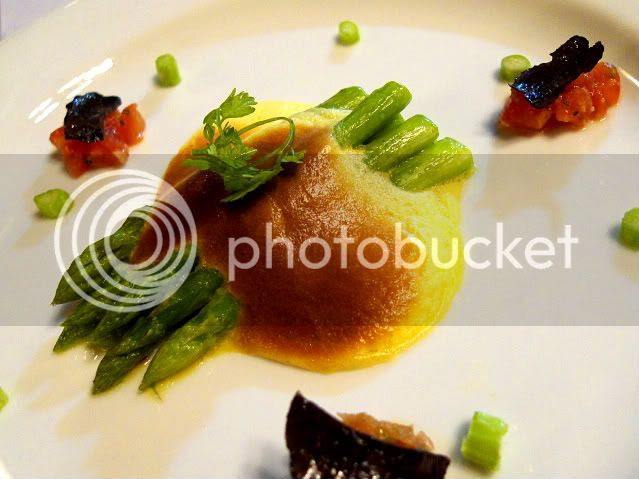 The meal kick started with a bang. Gratin of Asparagus with Champagne Sabayon and Black Perigord Truffles. Sabayon is quite similar to the Italian zabaglione. It is made from beating egg yolks while simmering the sauce. In the wrong hands, it can be grainy, lumpy or too watery. Fortunately, the Sabayon sauce here is perfect. Light, fluffy and foamy (like a savoury souffle), yet rich from the cheese with a hint of bitterness. The sauce was flamed giving the top a bit of char, which is an unusual twist to the way this sauce is served. Black (Perigord) Truffle shavings were placed on top of the sour tomatoes which brings out it's earthy, mouldy, pungent yet captivating aroma very well. 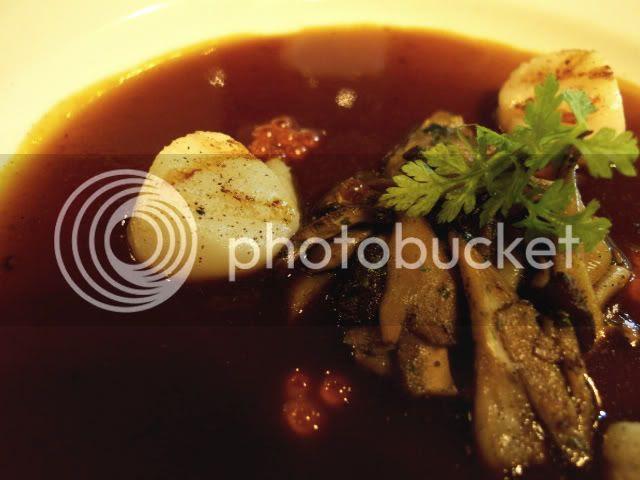 The Star attraction of the night. Grilled sea scallops with Wild Mushroom Fricassee in Port Wine Sauce. The dish came with 3 pieces of medium sized scallops with the Fricassee in the middle. The Port Wine Sauce was exquisite. Smoky and aromatic, it enhanced the wild mushroom fricassee which was probably reduced in chicken stock? The addition of Salmon Roe, which is an unusual ingredient in French Cuisine, was imaginative and inventive. The roe provided a very contrasting texture to the dish and most importantly, when chewed, the exploding salmon roe blended so well in the sauce! Bravo! 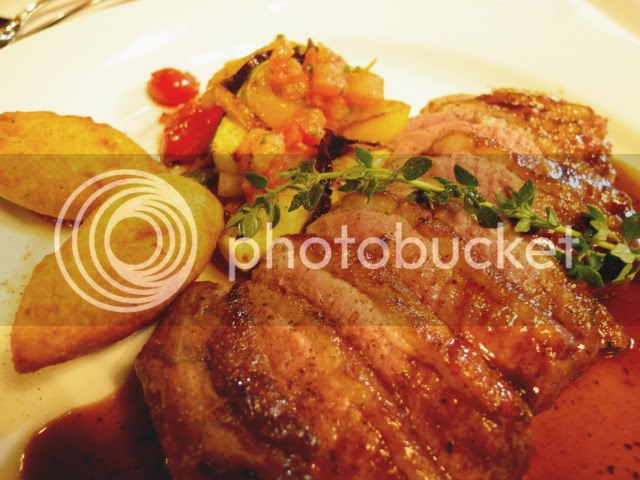 Main course for the night was Mountain Honey Roasted Duck with Shallots Confit and Vegetables Fricassee with Sun Dried Tomatoes. The Shallot Confit was used only sparingly, and the Vegetables fricassee was not impressive. The potatoes were thyme flavoured. Duck breast was still moist and succulent. Unfortunately, this dish just tasted average compared to the lush and decadently flavoured entrees. The supposed main attraction was superceeded by the opening acts! If I were the duck, I'd probably throw a quacking bitch fit! 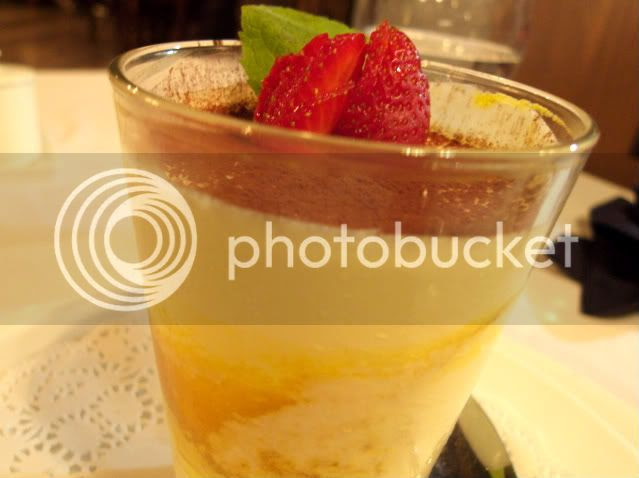 The Mango Tiramisu came with lots of cream and the Mango flavour was quite balanced. Marscapone Cheese was creamy. No complaints.

Cooking is an art. The harmonious blend of flavours with the myriad of cooking techniques, understanding the different temperament of the ingredients together with the regional differences of the ingredients is a challenge. Everybody cooks, my mom did cook a good pork chop. Imagination, Creativity, Cooking Technique and Presentation is what differentiates a great chef from a good one. It would be interesting to see what the future holds for Le Bouchon under it's new management. The first signs are already very promising.

Ah, yes! I nearly forgot the most painful part of the dinner. Total damage (including one bottle of Evian mineral water, one aperitif Americano and an espresso) was about RM 220. It will be just an occasional indulgence unfortunately. 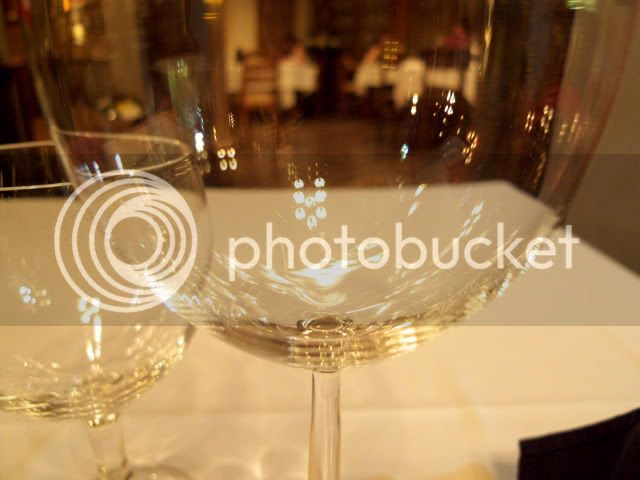 O Muse! What does it matter, life or death?
I love, and want pallid passion, I love and want the pain;
I love, my desire for a kiss envelopes me;
I love, and want to feel it on my emaciated cheeks
That stream of love from an endless spring that could never dry up.

What a charming restaurant. The asparagus looks good. Can you ever get enough of truffles?

Is it related to Le Bouchon at Suriwong? Miss you during our monthly chow down at L'etage. Was it Antoine who said that he wants to be reincarnated as a Truffle Hound?

Glad you are able to get your truffle fix in Malaysia after bitching about it for the past 2 years.

@Maleewan: I don't know about being satiated with truffles and what the limit is, but 3 small shavings is definitely not enough!

@Chalawan: You remembered, my friend. Yes, it was Antoine. I do not think the Bouchon here is related to the one in Suriwongse. It is not in their web site or name card.